Belur and Halebidu Travel Guide – Had you ever thought it possible that stones could make you laugh, cry, and gape in awe and wonder? Yes, stones too can speak volumes and this fact was highly corroborated when I visited the temple towns of Belur and Halebidu.

The stones that are an inherent part of the intricately carved temples at these places have stories to tell and you need to experience it personally to believe what I am saying.

No words or images can do justice to the architectural magnificence that is so synonymous to the temples here and the level of dedication, skill, and craftsmanship that has gone towards their making is simply unimaginable.

I bet your state will be like that of a child in a sweet shop, not knowing which, how much and from where to admire and appreciate!

Before you start let me clarify that this place is for those who admire art, sculpture, architecture, and history. If you are interested in any of these subjects, then this is certainly a ‘not to miss’ destination.

If you are not interested in these subjects, then this destination is not for you as there is nothing else here.

Where are Belur & Halebidu located?

The twin towns of Belur and Halebidu are located 17 km apart in the district of Hassan in Karnataka. Bangalore to Belur is roughly 220 km. via Hassan. Nestling on the banks of river Yagachi, the towns are home to some of the best temple architecture of the earlier eras and the engineering skills of the artisans of yore can be witnessed even today.

What are the best times to visit?

The ideal time to visit the towns in the period between October and April. During this time, the area experiences pleasant weather during the mornings and evenings. You need to be protected well enough if you want to move about in the afternoons as the weather can get too hot for you to appreciate the beautiful and intricate work in the two temple towns.

The famed dance festival, the Hoysala Mahotsava is held here in the month of March. It is best if you can witness this important festival celebration.

How to reach from Bengaluru

You will need to resort to autorickshaws and taxis to move about within the area. If you have deep pockets then taxis are a better option.

There are very few choices for accommodation at Belur and Halebidu. It is best for you to stay at Hassan if you want to cover both the areas of Halebidu and Belur. 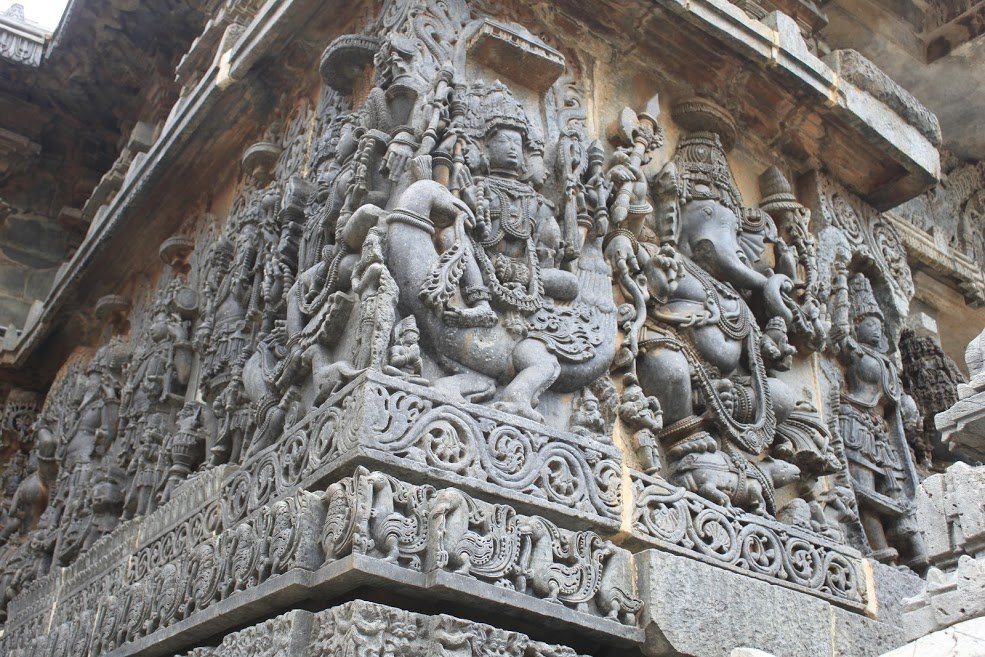 Belur and Halebidu are two shining jewels in the cultural heritage of India. Both the towns were seats of royal power during the reign of the Hoysalas around the 12th century. The capital which was earlier located at Halebidu was shifted to Belur after its invasion by the Sultanate of Delhi.

The main spot of tourist attraction in Belur is the magnificent Chennakesava Temple dedicated to Lord Vishnu. It is said to be constructed to commemorate the victory of one of its greatest rulers, King Vishnuvardhana over the Chola kings in 1117. Though Jakanachari was the main sculptor, hundreds of sculptors have put in their talent and hard work to make this a magnificent temple.

The Kappe Chennigaraya temple adjacent to it was constructed by King Vishnuvardhana’s wife, Shantaladevi and is another awe-inspiring example of astounding architectural work. Two more temples in the complex showcase the engineering genius of the Hoysalas.

Halebidu, in literal terms, means ‘Old City’; it was named as such because it was ravaged twice by forces of the Delhi Sultanate. The temple town is home to the magnificent Kedareshwara and Hoyaleswara temples which showcase the prominent Hoysala style architecture. Other worth visiting spots are the two Jain Basadis. An archaeological museum is also housed within the complex.

Architectural Splendour of the Belur Temples

The Chennakesava Temple is the major tourist attraction in Belur and is dedicated to Lord Vijayanarayana, one of the many avatars of Lord Vishnu. The temple was built to commemorate the victory of Hoysalas over Cholas and hence the name Vijayanarayana. The temple is the best example of the exquisite carvings and sculptures of the time and stands testimony to the craftsmanship of the Dravidians. The temple took around 103 years to be completed. The work which began during the rule of King Visnuvardhana was finished by his grandson.

No stone lies untouched; each one of them has detailed work done on it. The elegant sculptural work contained in the temple’s wall-images is par excellence; the exquisitely carved pillars and statues are certain to take your breath away. They never fail to fill you with awe irrespective of the number of times you pay a visit to the site. Soft soapstone or gray-green chlorite has been the material used in the making of the temple.

The temple is of assembled type. No binding material was used to construct the temple. There has been no major destruction to the temple, only some small idols are stolen which is the handwork of small thieves.

Following are some of the things to look out for in this temple:

The Kappe Chennigaraya Temple is situated within the premises of the Veernarayana Temple and lies to the southern part of the Chennakesava Temple. The temple’s interiors are adorned with excellent carvings and sculptures that surely take your breath away. The temple was constructed by Queen Shantaladevi.

The Chennakeshava deity is decorated as Mohini by using all the ornaments worn by female goddesses. The specialty of this temple is that it attracts both devotees and tourists. The temple provides food for the devotees free of cost in the afternoons.

What to look for in Halebidu Temples 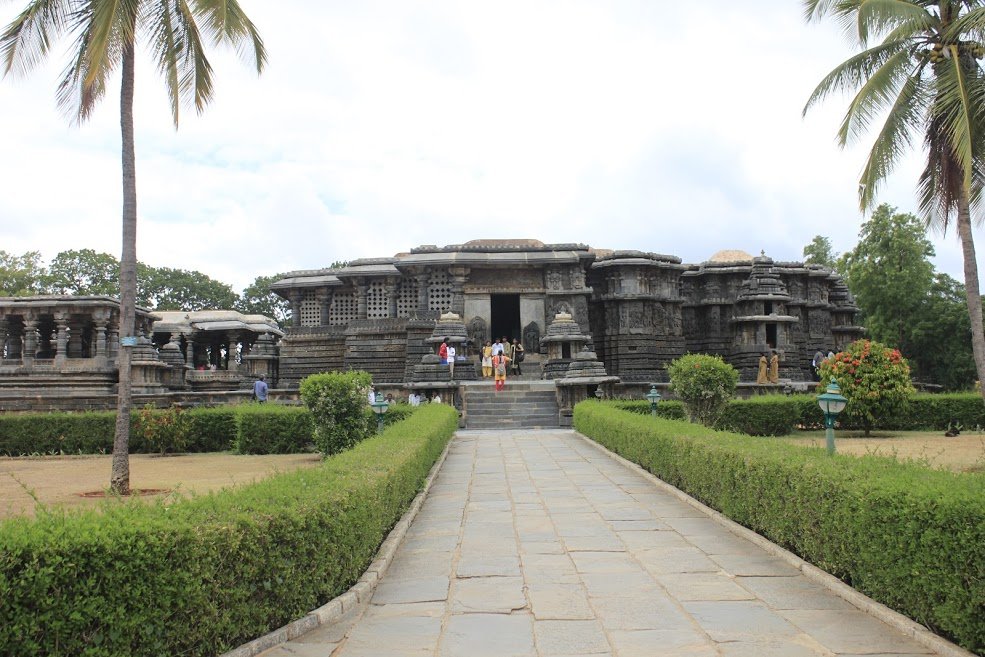 Halebidu has two landmark temples – Kedareswara and Hoysaleswara which are situated at about a distance of 1 km. which were constructed around 1121 AD have been nominated as World Heritage Sites by UNESCO.

The Hoysaleswara temple which is dedicated to Lord Shiva too is filled with intricate carvings and engraved sculptures. The shrine is built on an elevated star-shaped platform and displays beautiful scrollwork in stone. The Garuda Stambha is one of the many attractions of this place. The ramparts of the shrine are decorated with carvings of many gods and goddesses, birds, animals and dancing girls. The lowest design pattern of the shrine depicts about 2000 elephants along with riders, all in varied postures set amid several horses, floral motifs and mythical beasts. The beautiful carvings on the doorkeepers or Dwarpalakas as they are called have to be seen to be believed.

Besides, the statue of Nandi, bull and Lord Shiva’s chariot that are connected to the temple through a pathway are noteworthy attractions within the complex.

The Kedareshwara Temple which is a testimony to the Chalukyan architecture style was constructed by King Ballala II. Though the temple largely stands in ruins today its basement still exhibits a number of carvings depicting anecdotes from classic epics like the Mahabharata, Ramayana and Bhagavad Gita. The decorations on the ceiling and walls of the temple look beautiful even today.

The temple is dedicated to Lord Shiva and is enshrined in the inner sanctum as a shiva linga in black stone. In addition, there is a small statue of Janardhana and Brahmalinga held in the shrine.

Other places to visit near Halebidu

Other places of tourist attractions around Halebidu are Hulikere Pond, Nagareshwara Temple, Dwarasamudra lake, and Jain Basadis. These places are worth spending your time. You can also visit Somanathapura and Shravanabelagola if time permits. These two places also have carved a niche in history as worth visiting places.

Importance of a Guide during your Visit

Without a guide, you will not understand the true meanings of the sculptures at these places. Every ‘Shila Balike’ has a story behind it. A guide alone can recreate the history of years gone by and make the entire tour very interesting and enlightening.

Explaining the origin of the main sculpture pieces will itself take about 3-4 hours. Government-appointed guides are available near the temple. Engage a person who knows your language.

This is an important factor as that alone will enable you to drown in the history and intrigue of an earlier era and build impactful memories for years to come.

Shopping tip for you

As you have shown keen interest in this article, it means you are a lover of art and sculpture. Locals make carvings of small statues and artifacts which are available for sale outside the temple. Do buy them for two reasons, first it is their livelihood, second, you are encouraging local talent. Do not forget to bargain and check the quality before you buy it.

After seeing these exceptional masterpieces, one will be curious about the dynasty which gifted this to us. Hoysala dynasty, which mainly ruled in Karnataka from the 10th Century to 14th Century, is synonymous with sculpture, bravery, and art.

They derived a unique style of sculpting by combining the Aryan and Dravidian styles. Somanatheshwara Temples, Belavadi Temple, Nuggehalli Temple and many more temples in South India are also the contributions of Hoysala rulers.

Hoysala kings were also patrons of literature and famous poets like Janna, Raghavanka, Harihara, Rudrabhatta,  created their best works under the patronage of Hoysala kings.

A visit to the temple towns of Belur and Halebidu is an experience of a lifetime. So if you are planning a holiday down to the southern part of India, I would advise you to set aside some time for a visit to these two interesting places.

Before you go– I hope the blog post answered some of the questions about Belur & Halebidu travel guide. Do you still have a question? Feel free to comment or rate us by clicking the 5 stars.

About the Author: Lakshmi Vijayadas

Writing inspires me to travel and travel inspires me to write. I started writing in my free time which habits sculpted me into a freelance writer and blogger. I write mostly for my blog realbharat.org. Quora is another platform where I would like to write. Apart from travel writing, I am also interested in introducing people to traditional Indian food which are vanishing from our menu.