On one hand, Himachal Pradesh is famous for its hill stations and outdoor activities like Mountain biking, paragliding, rock climbing, heli-skiing, etc. and on the other hand, it is famous for its spiritual and devotions.

HOW MANY SHAKTI PEETHAS?

According to Hindu mythology, there are 108 Shakti peeths. Many of these historic places of goddess worship are in India but there are two in Nepal seven in Bangladesh, three in Pakistan, in and one each in Sri Lanka and Tibet

Sati, Daughter of Raja Daksha and first wife of Lord Shiva. The Raja Daksha performed a yagna, in the yagna he invited all the god and goddess except Shiva and Sati. She expressed her wish to attend the yagna to Shiva, who tried his best to dissuade her from going.

Shiva eventually relented and Sati went to the yagna. Sati being an uninvited guest was not given any respect at the yagna. Daksha disrespect Shiva and Sati. Sati was unable to bear her father’s insults toward her husband, so she immolated herself. in that yagna.

Knowing this, Lord Shiva destroys Daksha yagna. and Shiva carries the burnt body of Sati on his shoulders and wanders round the world.

To control Lord Shiva anger Lord Vishnu, followed him and made the body of Sati into pieces with his Chakrayudha. After the whole body disappears from his shoulders Lord Shiva was back to a normal state and blesses the world. 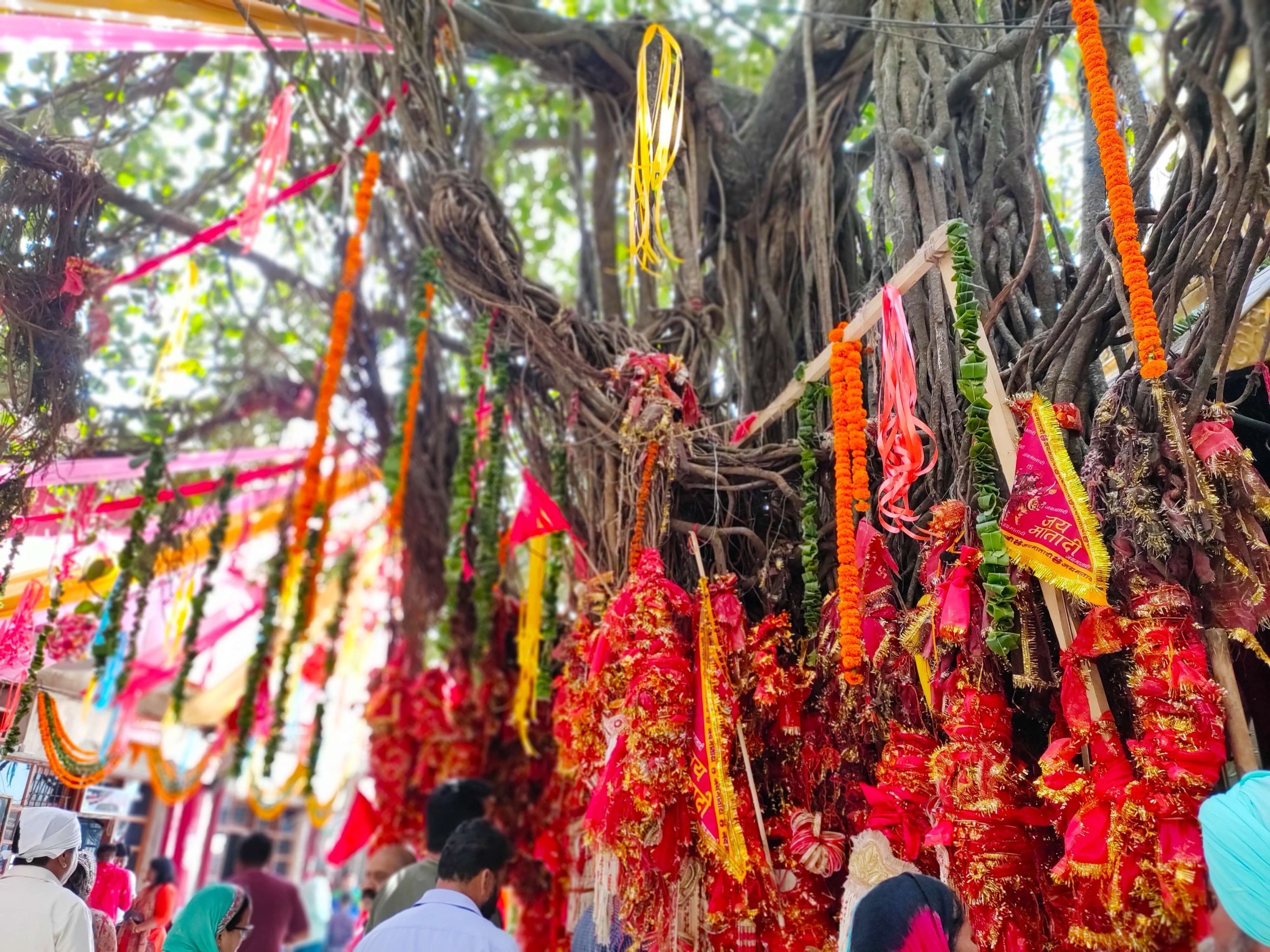 Chintpurni is situated in Una district of Himachal Pradesh. The temple is situated on one of the highest hills of the Sola Singhi range. It is about 3km west of Bharwain which is located on the Hoshiarpur-Dharmashala road.

Private vehicles are not allowed beyond the Chintpurni temple. Bus stand which is about 1.5 km from the Temple. Devotees need to walk this distance. About half of this distance is a gentle uphill incline and through a busy market.

Nearest airport is at Gaggal in Dharmshala, which is in Kangra district. Distance to Chintpurni is about 60 km.

The nearest railway station is Chintpurni which is about 17km from chintpurni temple. Another nearby station is Una at 50km and Hoshiarpur at 42km.

There are number of hotels and lodges to stay ranging from budget to luxury.

The Navaratri fairs in Ashwin (September–October) and Chaitra (March–April) are popular with devotees when accommodation is very high. Other popular days are Sankranti, Purnima and Ashtami.

There are a number of Dharamshala, guest houses and hotels of varying quality in and around Chintpurni. Himachal Tourism runs Hotel Chintpurni Heights (formerly Yatri Niwas) at Bharwain, near Thaneek Pura which is only 3 km from the Chintpurni temple.

It has views of the Swan Valley to the south. At night to the west one can see the bright lights of the Temple and its bazaar. Looking towards the northwest are the shimmering waters of the Maharana Pratap Sagar (Pong Dam lake). 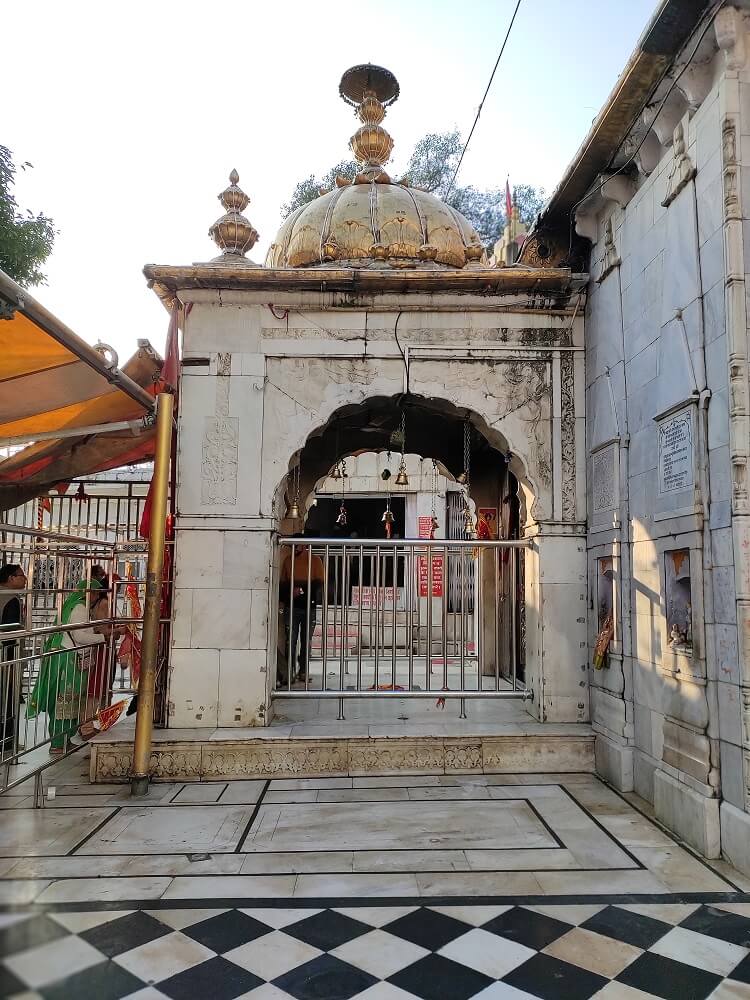 Jwala Ji temple is situated 34km from the south of Kangra in Himachal Pradesh and 56km from Dharamshala. The temple is dedicated to Jwala Devi a form of the holy goddess herself. Devoters need to walk one kilometer to reach to the temple.

This is a novel temple that does not have an idol. It is believed the Goddess resides in the holy flames of the temple which miraculously burn day and night without any fuel from outside.

Science believes that the fires burn due to some natural jets of combustible gas from the fissures of the rocks. However, the heart of devotees still nurses the belief of the Goddess residing in these flames.

Every day five arties and one hawan are performed by the priests which are also the main attraction of Jwala Ji temple. The devotees offer flowers, fruits, chunri, misri, milk, and rabri to the goddess as a sign of their devotion.

Navaratri is a popular time to visit this holy pilgrimage. The temple has colorful fairs in the months of March-April and September-October

From Chintpurni to Jwala ji is 35 km. It takes 1hr 30 mins to reach by bus. Frequently Himachal road transport corporation buses running on this route. 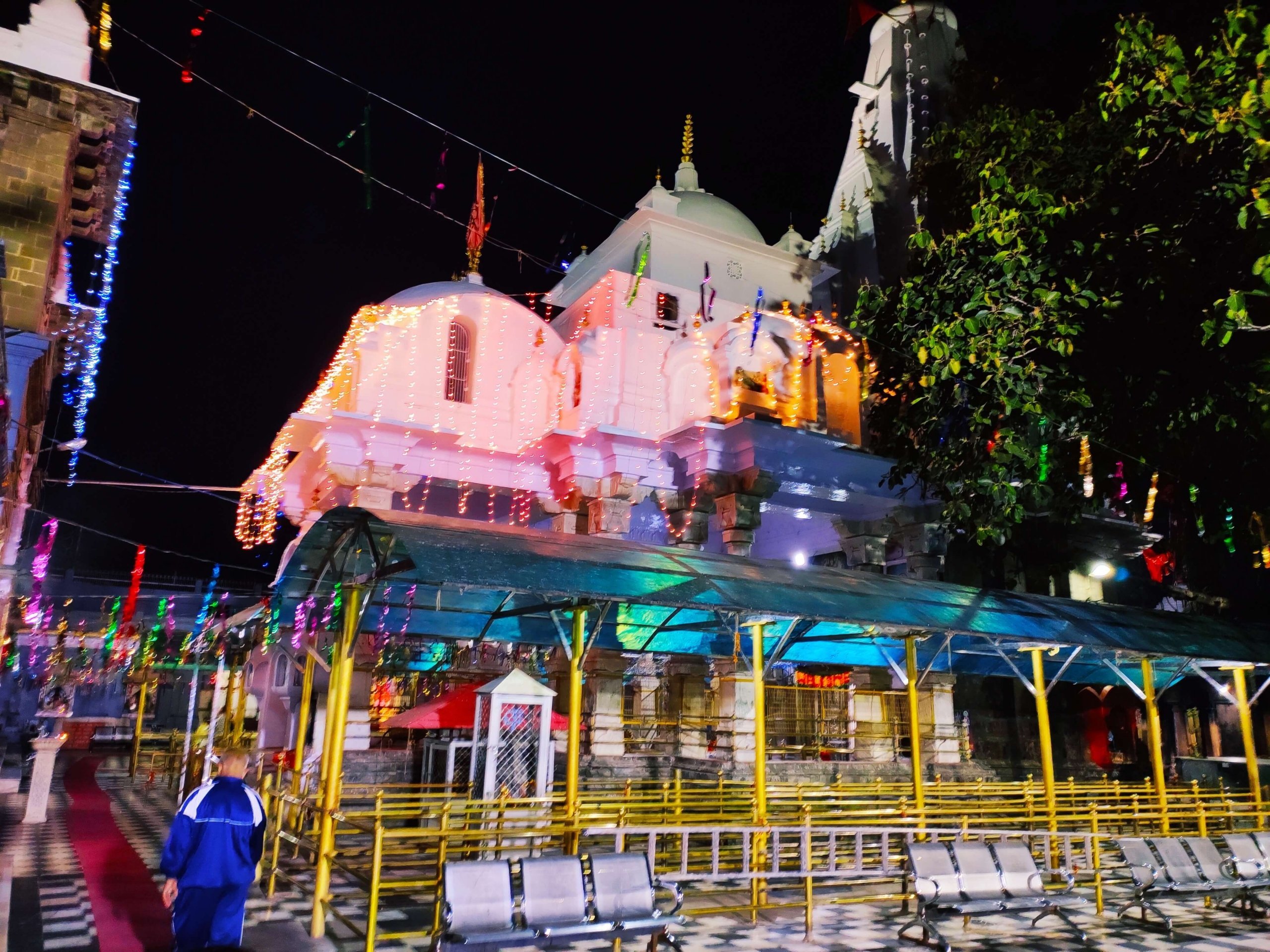 Bajreshwari temple is also known as Kangra Devi dedicated to the goddess Vajreshvari, a form of Druga located in the Kanga District of Himachal Pradesh behind the crowded market of Kangra Town in Himachal Pradesh, India.

The main gate entrance has a Nagarkhana and is built similar to the Bassein fort entrance. The temple is also surrounded by a stone wall like a fort.

The climate is similar to other hill station in the Himalayan region. September to June are the best months to visit Kangra.

Places to visit in Kangra

From Jwala Ji to Bajreshwari temple is 32km it takes 1hr  by bus. 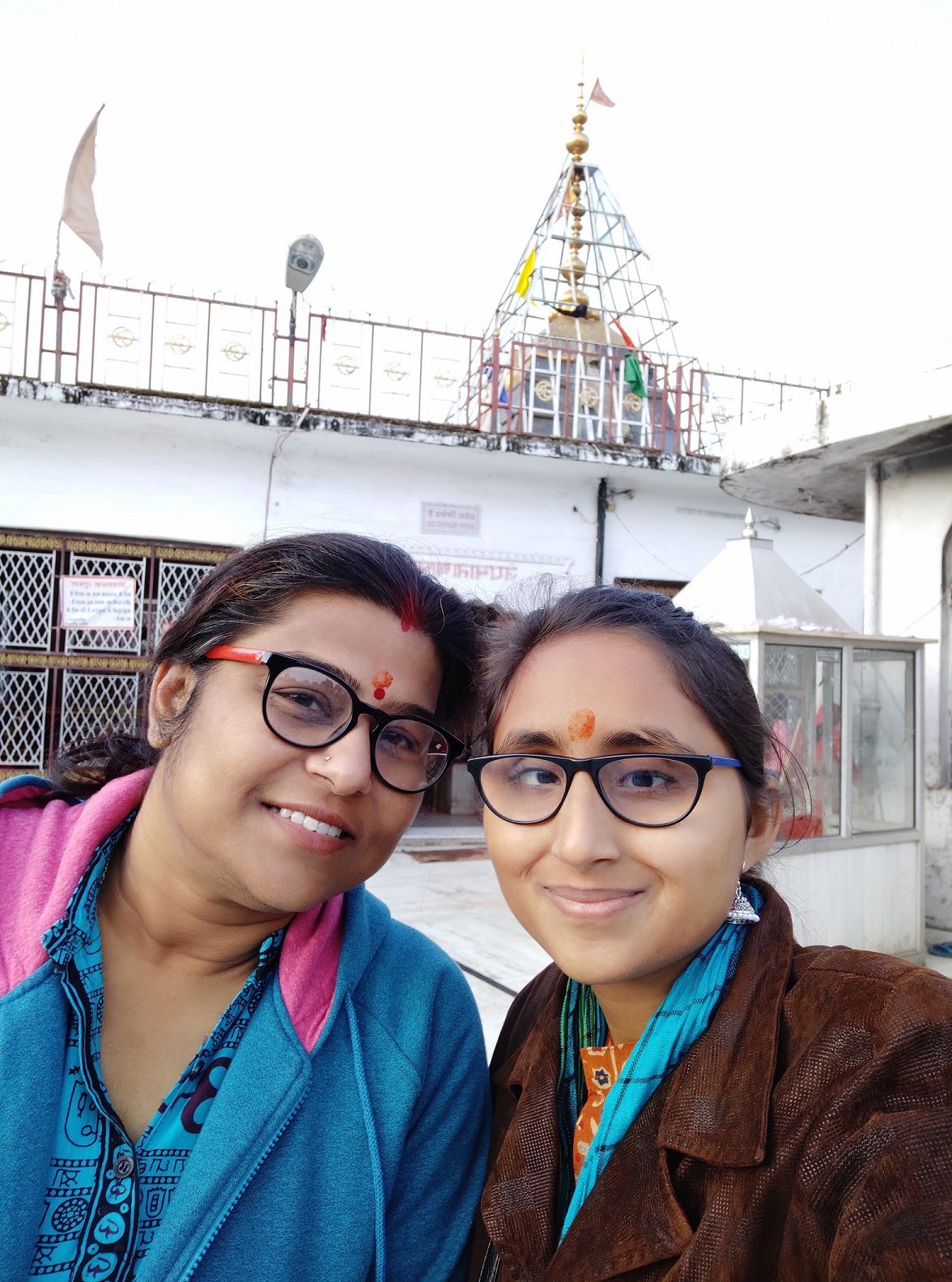 Chamunda Devi temple is located on the bank of the Ban Ganga river which is 10 km west from Palampur in Kangra district of Himachal Pradesh.

This ancient temple dates back to the 16th century. The temple is dedicated to Chamunda Devi, who is a form of Druga / Shakti. Chamunda Devi Temple is believed to be the abode of ‘Shiva and Shakti’. Due to this reason, it is also known as ‘Chamunda Nandikeshwar Dham’.

The temple is situated in the picturesque beauty of lush green mountains. Many saints can be seen here involved in meditation and penance.

The temple complex includes handicrafts center that has various items like woodcarvings, wooden toys, honey, black pottery, Kangra tea, and world popular Kangra Paintings. The interior of the sanctum is embellished with carved silver sheets The architecture of the shrine is quite simple but the religious influence is simply overwhelming. The temple has beautiful carvings rendering floral themes and different idol, overlooks enchanting views of the Chamba Valley and Himalayan range.

The Temple is easily accessible via road from Dharamshala, Palampur , Kangra and other major cities of Himachal Pradesh. Tourists have the option to hire taxis from Dharamsala or Palampur.Besides the Himachal state transport buses are also available

It is 23 km from Bajreshwari temple and 55 km from the Jwala Ji temple. 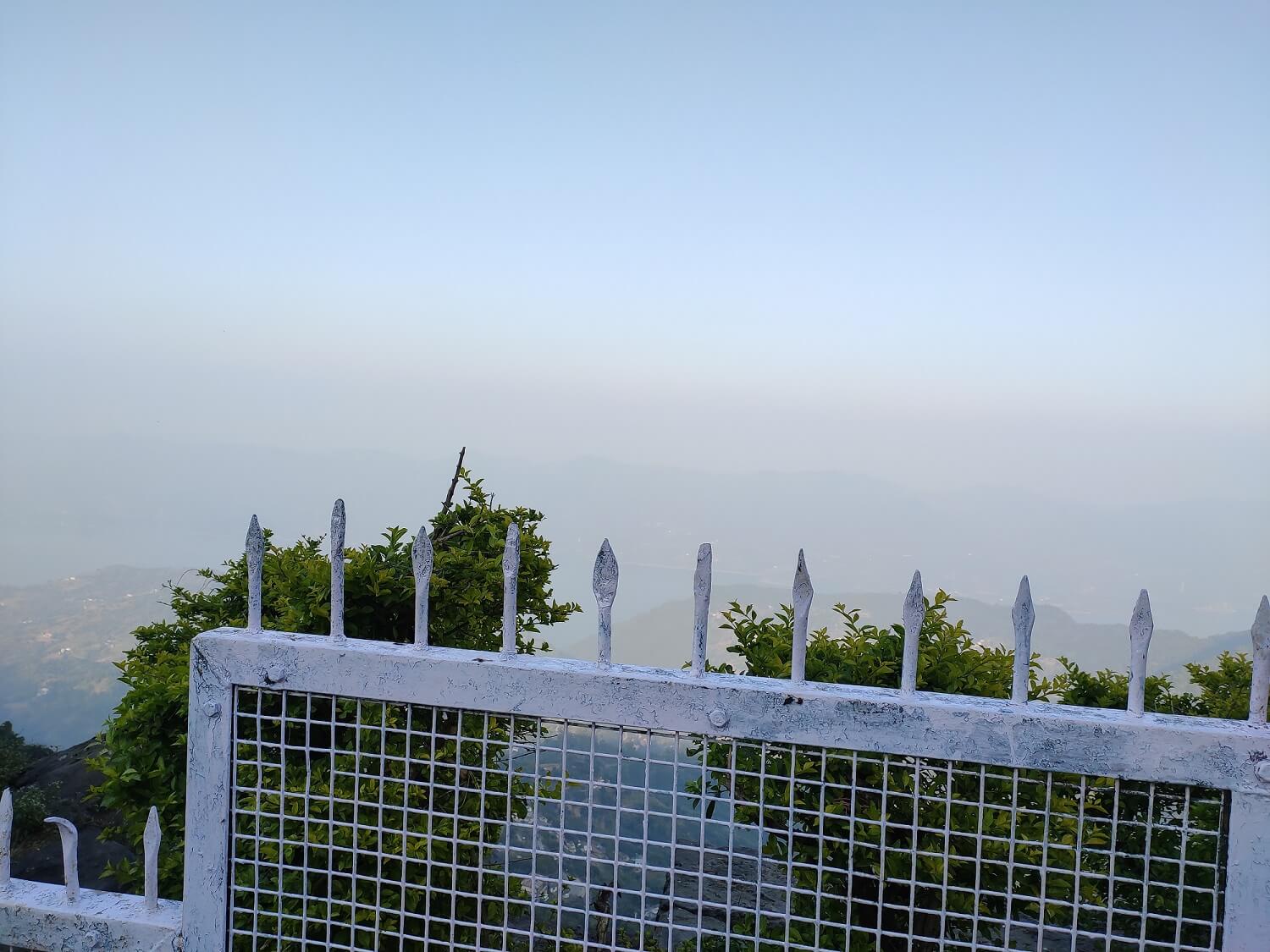 Naina Devi is located at the top of the hill in the Bilaspur district of Himachal Pradesh.

The temple at the top of the hill can be reached via road (that curves round the hill up to a certain point) and then by concrete steps (that finally reach the top). There is also a cable car facility that moves pilgrims from the base of the hill all the way to the top.

The hills of Naina Devi overlook the Gobind Sagar lake. The lake was created by the Dam. A special fair is organized during Chaitra, Shravan, and Ashwin Navratri, where millions of visitors from nearby states like Punjab, Haryana, Delhi, and Uttar Pradesh, visit Sri Naina Devi Ji Temple to attend the festivities.

While a lot of people prefer to trek till the top of this hill, chanting Jai Mata Di, many simply take Palkis for a comfortable ride. Resting facilities are also available on the way,

The Naina Devi Temple is connected by National Highway no. 21 and the nearest airport from here is Chandigarh, the distance between Bilaspur and Chandigarh is approximately 100 km

I started my journey with my aunt and it was very smooth and pleasant. We had Himachal Express train from Delhi at 10 pm but due to some technical issue .the train was delayed by 6 hours. After reaching Chintpurni station we covered 3 places on the same day chintpurni , Jwala Ji and kangra Devi .and 2nd day we gone Chamunda Devi and Naina Devi.

From Chintpurni to Jwala Ji and from Jwala Ji to Kangra Devi we opt for HRTC buses total fare of bus was 180 rupees only.

Things to know before starting your journey

Hey before you go– I hope the blog post answered some of the questions about 5 Shakti Peethas. Do you still have a question? Feel free to comment or rate us by clicking the 5 stars. You are welcome to join our vibrant Facebook group